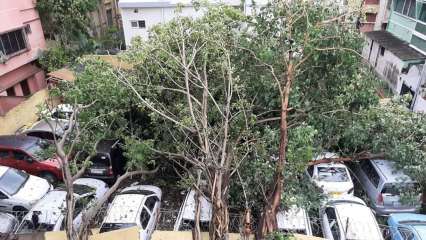 Prime Minister Narendra Modi will travel to West Bengal and Odisha to take stock of the situation in the wake of Cyclone Amphan and conduct aerial surveys of the affected areas, his office said on Thursday.

“Tomorrow, PM @narendramodi will travel to West Bengal and Odisha to take stock of the situation in the wake of Cyclone Amphan. He will conduct aerial surveys and take part in review meetings, where aspects of relief and rehabilitation will be discussed,” the Prime Minister’s Office said in a tweet.

NDRF teams are working in the cyclone affected parts. Top officials are closely monitoring the situation and also working in close coordination with the West Bengal government, he said.

The extremely severe cyclone Amphan made landfall at 2.30 pm on Wednesday between Digha in West Bengal and Hatiya island in Bangladesh, packing heavy rain and winds with speeds of up to 190 kmph, triggering heavy rainfall and gustings in various parts of the state.

Kolkata and several parts of West Bengal wore a battered look on Thursday after ‘Amphan’ ripped through the state. The heavy wind and rain blew up shanties, uprooted thousands of trees, electricity poles and telecom towers and flooded low-lying areas.