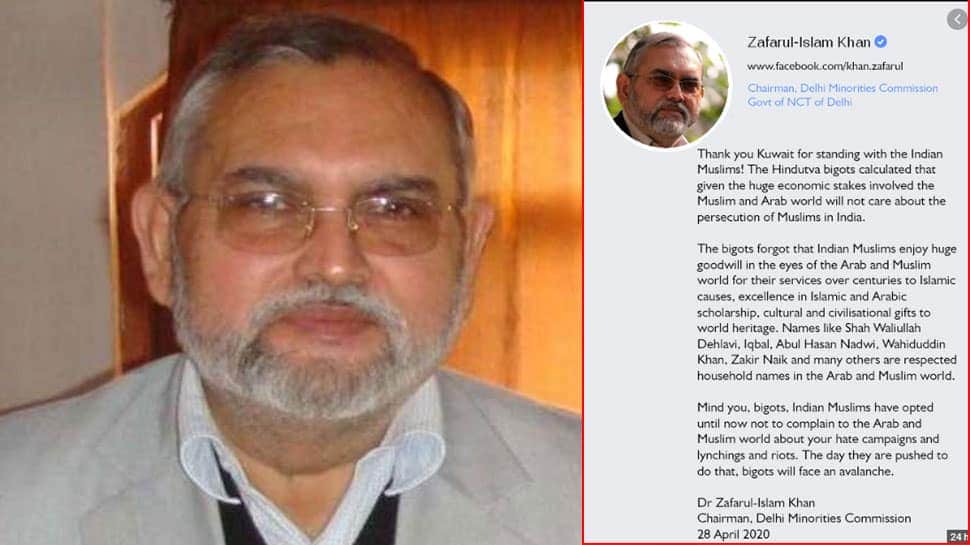 New Delhi: The Delhi High Court on Friday (May 22) directed Aam Aadmi Party-led Delhi government to complete the action initiated against Delhi Minority Commission (DMC) chairman Zafarul-Islam Khan for his controversial post on Social Media. The court also directed that the process initiated under the provisions of the Delhi Minorities Commission Act against  Zafarul-Islam Khan be concluded within two weeks as his tenure ends on 14th July 2020.

It was argued that if the removal process against the respondent is delayed, the petition would become infructuous. The court ordered the Delhi government to conclude the process under Section 4(4)(f) of the Delhi Minorities Commission Act against Khan in accordance with the law.

The petitioner said that Zafarul Islam Khan has abused his position and his continuance on the said post is detrimental to the public interest. The court was also informed that the Lieutenant Governor has already directed steps to be taken in this respect besides issuing a show-cause notice on May 8, 2020.

The court observed, “Since under Section 4(4)(f) of the Delhi Minorities Commission Act, the opinion whether a member or a Chairperson of the Delhi Minorities Commission has abused his position and/or in the public interest is liable to be removed from the post of Chairperson or member, is to be of the GNCTD, it is not open to this court to order removal …. ” even before the DMC and LG have formed an opinion in this respect.

In accordance with the last order, a status report has been filed. The said report said, “the content of this post prima facie appears to have the potential of disturbing communal harmony in the city. The matter is particularly serious considering that one of the functions of DMC is to make recommendations for ensuring, maintaining, and promoting communal harmony in Delhi. Hon’ble Lt. Governor has directed to the Administrative Department concerned to initiate action as per provision of Section 4 of the Delhi Minorities Commission Act against Sh. Zafarul-Islam Khan.”

Zafarul-Islam Khan has raked up a controversy with his Facebook post, where he threatened “Hindutva bigots” of complaining to “Arab countries and the Muslim world” about the “hate campaigns and lynchings and riots in India”. The DMC Chairman also said that “bigots will face an avalanche”.

Warning “Hindutva bigots” in his post in April, Khan said, “Mind you, bigots, Indian Muslims have opted until now not to complain to the Arab and Muslim world about your hate campaigns and lynchings and riots. The day they are pushed to do that, bigots will face an avalanche.”

Over 5.72 lakh tickets booked in 24 hours for special trains running from June 1