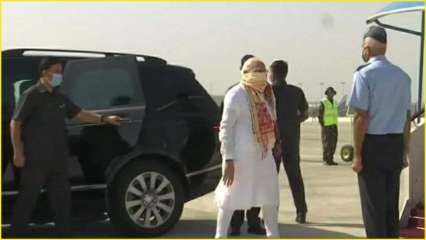 According to recent updates, Prime Minister Narendra Modi has arrived at West Bengal’s Basirhat after completing the joint aerial survey with Chief Minister Mamata Banerjee. A high-level meeting will be held at Basirhat College now. The ones who will attend the meeting include the Prime Minister, the Chief Minister, the Chief Secretary, and state ministers and secretaries of the concerned departments.

Prime Minister Modi arrived at the Netaji Subhas Chandra Bose International Airport in Kolkata’s Dum Dum at about 10:45 AM on Friday, as part of his tour to West Bengal and Odisha today to take stock of the situation in the wake of Cyclone Amphan and conduct aerial surveys of the affected areas.

Modi was received by West Bengal Chief Minister Mamata Banerjee and Governor Jagdeep Dhankhar at the airport. The governor will accompany the Prime Minister and the Chief Minister on the aerial survey in the state. Other Central ministers, who hail from Odisha and West Bengal, including Dharmendra Pradhan, Babul Supriyo, Pratap Chandra Sarangi, and Debasree Chaudhuri will also accompany the premiers in the aerial visit.

Political leaders of the state BJP unit, like Dilip Ghosh, Locket Chatterjee, and Mukul Roy were also at the airport to welcome Prime Minister Modi.

Prime Minister Narendra Modi received by West Bengal CM Mamata Banerjee on arrival at Kolkata Airport. The PM will be conducting an aerial survey of the areas affected by #CycloneAmphan. pic.twitter.com/gnsBx9maye

PM Narendra Modi received by West Bengal CM Mamata Banerjee and Governor Jagdeep Dhankhar on arrival at Kolkata Airport. The PM will be conducting an aerial survey of the areas affected by #CycloneAmphan. pic.twitter.com/efrNAog2Sd