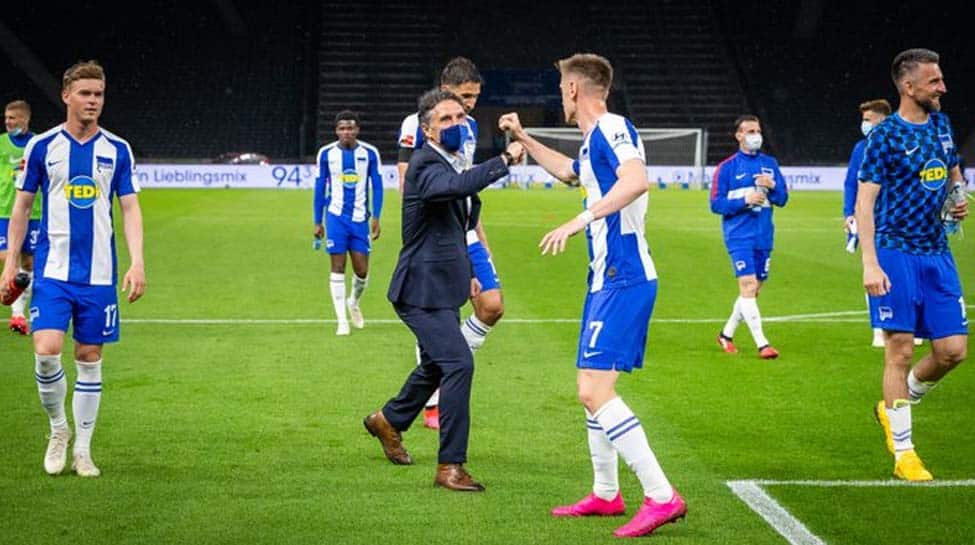 Hertha Berlin scored two quick goals after half time and snatched all three points against local rivals Union Berlin with a 4-0 win in the curtain raiser of the 27th round of the Bundesliga.

On Friday, the hosts controlled possession from kick-off, whereas newly promoted Union kept all their men behind the ball to lurk for counter attack opportunities, reports Xinhua news agency.

Hertha increased the pressure and had their first chance with 18 minutes played when Dodi Lukebakio tested Union goalkeeper Rafel Gikiewicz in a one-on-one.

Gikiewicz remained in the thick of things as he had to be on guard at the half hour mark as Matheus Cunha released a back-heel flick on target.

Union lacked penetration and focussed on their defence, but managed to unleash a dangerous free kick through Robert Andrich before the interval.

After the restart, Hertha started where they left off as Lukebakio lost another one-on-one against Gikiewicz.

The hosts finally broke through six minutes into the second half when Vedad Ibisevic headed home Marvin Plattenhardt’s pinpoint cross to open the scoring.

Union wobbled while Hertha showed no mercy with their rivals as Lukebakio rounded Gikiewicz to double the lead only 70 seconds after the opener.

Hertha were on fire and took the wind out of Union’s sails after Ibisevic teed up for Cunha, who made it 3-0 from the edge of the box.

Union couldn’t hold the pace and Hertha added another goal to their lead as Plattenhardt’s corner found Dedryck Boyata, who sealed the deal in the 77th minute.

With the result, Hertha Berlin climb to 10th meanwhile Union Berlin remain in 12th in the Bundesliga standings.

Jeetendra on son Tusshar Kapoor: I was not even 1 per cent of what he is as a father