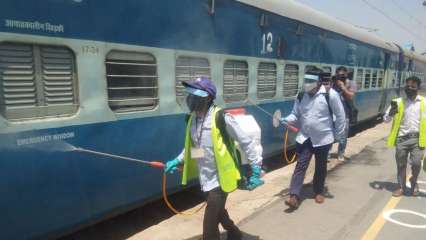 Railways Minister Piyush Goyal announced that in the next 2-3 days, people will be able to book their tickets from the counters as well. As the government prepares to steer the current situation in the country towards normalcy despite the rise in COVID-19 cases, Railways Minister Piyush Goyal on Thursday announced that development of protocols for resuming ticket booking at the counters is underway and in the next 2-3 days, people will be able to book their tickets from the counters as well.

As of now, tickets can only be booked online through the IRCTC website.

The minister also said that more trains will be resumed by the government, adding that it is now time to take India towards normalcy.

Goyal further informed that from Friday, booking of train tickets will resume at around 1.7 lakh common service centres across the country.

On Wednesday, Railways had announced that it will start 200 more passenger trains from June 1 onwards. These new trains will be plying in addition to the ‘Shramik Special’ trains and air-conditioned special trains which are carrying passengers from Delhi to 15 major cities.

Earlier today, Railways warned of the issues that people are likely to face while booking their tickets online for these trains that started at 10 am. Due to the possibility of several people logging into the portal at the same time, Railways said that they might face issues.

“As online bookings open at 10 am there might be teething issues. So many people will log in at the same time and all 200 trains would take time to FIRE up on reservation systems. There would be issues due to weather conditions in Eastern part of India so firing up from those locations would also get impacted. The firing of trains is a time-consuming exercise and it means actual loading of all info train journey, its booking parameters etc on IT system and this is done simultaneously from both the originating zone and terminating zone. Due to cyclonic conditions in the East, the firing from that end is expected to be impacted for some time. All are advised to have patience. Indian Railways is doing this graded restoration to ensure that maximum persons can move in the conditions,” Railways said in a statement.

Fare for these trains shall be as normal and for General (GS) coaches, being reserved, second seating(2S) fare shall be charged and seat will be provided to all the passengers.